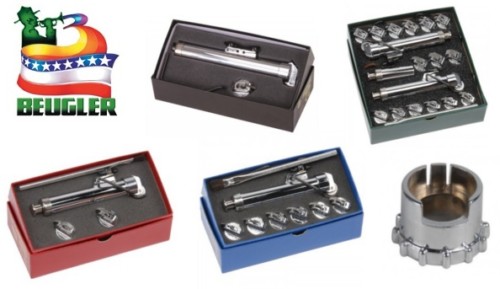 Beugler Pinstriping Tool is a small American company based in Los Angeles, California. The company was founded by Samuel Beno Beugler, who in 1933 developed and started production of Beugler Striper, a tool allowing to paint clean, fast and accurate lines on virtually any hard surface. One of the biggest advantages of this revolutionary device is the design that prevents paint from dripping during painting, regardless of the position of Beugler Striper.

The design of Beugler Striper has virtually not been changed since its creation, and the range of its application is becoming wider and wider. Beugler Striper is especially popular among people engaged in artistic painting, decorating/visual tuning of cars, motorcycles, and trucks, and its industrial versions are also used in the tire industry for tire marking. It is interesting that Beugler Striper is used by an employee of Rolls-Royce to create individual ornaments and designs in line with a customer’s order on the body of these luxury cars.

At the moment Beugler Pinstriping Tool offers several different sets of Beugler Striper, several types of wheelheads for the tool and some parts and accessories useful during painting with this ingenious invention. The sets are available in the following versions: Deluxe Kit, Professional Kit, Anniversary Kit, Anniversary Kit Plus and Jumbo Kit. Because the wheelheads offered for Beugler Striper are available in over 20 different models with the various widths of lines, they are divided into several groups to suit customer needs. You will find here a Standard, Jumbo, and Industrial wheelheads, as well as a set of 10 heads containing the most popular sizes. Among the available parts and accessories, there are products such as magnetic stripes to facilitate the use of the striper, adapters, pistons, guides with mounting.

We encourage you to visit the Beugler web site at the address indicated below: